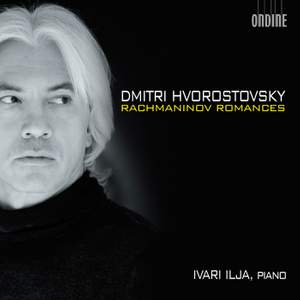 for all his famously silky tones and deep-brown vocal shading Hvorostovsky does shape the lines meaningfully, and his delivery suits these songs admirably...Not everyone needs to respond to the... — BBC Music Magazine, April 2012, 5 out of 5 stars More…

Rachmaninov: Ti pomnish' li vecher (Do you remember the evening)

No. 2. Ditya kak tsvetok ti prekrasna (My child, you are beautiful as a flower)

Rachmaninov: At the gates of the holy cloister

U vrat obiteli svyatoy (At the gates of the holy cloister)

For his first CD release on Ondine, star baritone Dmitri Hvorostovsky has chosen art song repertoire of great intensity and emotion from his Russian home country.

The 26 romances by Sergei Rachmaninov on this disc include such popular songs as Spring waters, op.14/11 or In the silence of the mysterious night, op.4/3.

Together with his longstanding duo partner, Estonian pianist Ivari Ilja, they have frequently performed many of these songs to great critical acclaim (“Mr. Hvorostovsky used the infinite shadings of his luxuriously dark and dusky voice to illuminate the yearning nuances of bitterness and regret. […] his admirable range of expressive and dynamic shadings [was] aptly mirrored by Ivari Ilja, an exemplary accompanist..” – The New York Times, 5 April 2008)

Dmitri Hvorostovsky is recognized as one of the leading and most charismatic baritones of our time, performing internationally at such opera houses as the New York Met, and partnering regularly with singers Renée Fleming and Jonas Kaufmann.

Dmitri Hvorostovsky recently signed to Ondine. He has released numerous highly successful CD and DVD recordings on such labels as Deutsche Grammophon, Philips, and Delos.

for all his famously silky tones and deep-brown vocal shading Hvorostovsky does shape the lines meaningfully, and his delivery suits these songs admirably...Not everyone needs to respond to the 'Russian soul', of course; but for those who do, this is a fascinating recital - even if it's best not listened to all in one go.

Though Dmitri Hvorostovsky revisits repertoire he recorded in his 1991 'Russian Romantics'...he has little to fear from comparisons with his more svelte-voiced younger self...his long-admired breath control is, if anything, more impressive...his baritone has a far richer palette of vocal resources to call upon...This is as fine as any currently available single-disc collection of Rachmaninov songs.

This is still a full-throated, virile baritone of great beauty, capable of dramatic declaration. It verges on the over-heated, but it's impossible to approach this 'heart-on-the-sleeve' repertoire without anything less than total commitment...Ivari Ilja tackles Rachmaninov's elaborate piano accompaniments with equal commitment.

This recording should come with the warning "too hot to handle", such is the combustible combination of Dmitri Hvorostovsky's heroic baritone with the flaming passion of intensely romantic Russian poetry...the listener is left quite drained but also lost in wonder at the beauty of the melodic line.