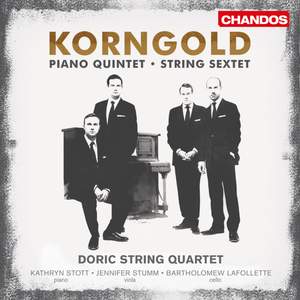 The Doric String Quartet and friends evoke a sepia-toned bygone time in their delicate but enthusiastic interpretations. They are too intelligent to add extra emotion to pieces already bursting... — BBC Music Magazine, April 2012, 4 out of 5 stars More…

Erich Wolfgang Korngold was one of the most astonishing prodigies in the history of western music, admired by Mahler, Strauss, and Puccini. His compositions were regularly performed by renowned musicians from around the world.

Korngold composed his Sextet for Strings between 1914 and 1916, at the same time as his opera Violanta, and for this reason perhaps, it takes on some of the theatrical elements of that work. The first movement presents some highly intricate counterpoint among the different voices. In the Adagio the mood shifts to one of intense sensuousness. The third movement brings relief to the highly charged atmosphere. Here Korngold plays – sometimes with an air of irony, sometimes jokingly, sometimes more straightforwardly – with that most Viennese of genres, the waltz. The finale, in typical Korngold fashion, is high-spirited and good-humoured.

The highly successful premiere of the Quintet for Two Violins, Viola, Cello, and Piano took place in Hamburg in 1923 with the composer at the keyboard. The work is in three elaborate and complex movements, with a piano part of considerable difficulty, and string writing on a virtuosic scale. With good humour and charm aplenty, the quintet displays the composer’s sunny disposition. In the work Korngold incorporated a musical code that he had developed to send secret, loving messages to his fiancée during concert performances.

Described by the magazine Gramophone as ‘one of the finest young string quartets’, whose members are ‘musicians with fascinating things to say’, the Doric String Quartet has received rave responses from audiences and critics across the globe. The Quartet’s recent recording of Korngold’s string quartets was a 2010 Critics’ Choice in Gramophone, and the group’s most recent recording on Chandos (CHAN10692), of Schumann’s three string quartets, was ‘Recording of the Month’ in BBC Music. The Quartet is joined on this recording by Kathryn Stott on piano, Jennifer Stumm on viola, and Bartholomew LaFolette on cello.

The Doric String Quartet and friends evoke a sepia-toned bygone time in their delicate but enthusiastic interpretations. They are too intelligent to add extra emotion to pieces already bursting with it; instead they faithfully enter the spirit of old Vienna...the Piano Quintet's slow movement is a special highlight - rapt, tender and sincere.

The Quintet opens with one of those glorious Korngoldian melodies of the type that would later translate into music for the silver screen...The Sextet is given an equally vigorous and stylish reading with passages of great tenderness...It aches to have lyrics attached - at least that is how the vocal quality of the playing emerges in this warmly recorded disc with its excellent booklet

The Doric Quartet is making a name for itself in Korngold...I’d be more than happy to recommend the Doric Sextet for its tonal warmth, and its finely structured approach to the Sextet

fine performances from the Doric String Quartet (and friends), in a decisive reading of the String Sextet, full of tone in the Adagio and fleet of foot in the closing Presto. They are joined by Kathryn Stott for the Piano Quintet in another commandingly eloquent account.

The performances are superb.