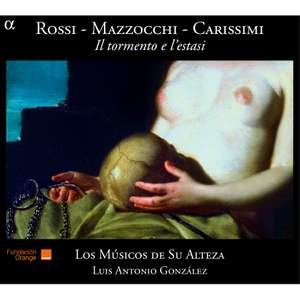 The instrumental playing, in both the sacred works and Marini's famous Passacaglia is very assured — International Record Review, September 2012

Los Músicos de Su Alteza has since the release of its first two albums on Alpha (Samaniego – Alpha 153 & Nebra – Alpha 171) established a reputation as the champion of unjustly forgotten Spanish music. In this new recording based on the themes of Torment and Ecstasy dear to the baroque mind, Luis Antonio González provides us with a selection of works that are as unexpected as they are unknown, tying everything together in the end with a masterpiece by Carissimi: Jephte.

The musicians breathe new life into 1640s Rome and all the emotions conveyed by the Cantatas on this recording: sin, guilt, regret, penitence, punishment, supreme joy, ecstasy and glory... This is a haunting album on which the artists take the link between text and music to a new jubilatory high as well as a great illustration of the harmonic wealth that played a determining role in the history of musical expression in general, and the first baroque period in particular.

The instrumental playing, in both the sacred works and Marini's famous Passacaglia is very assured