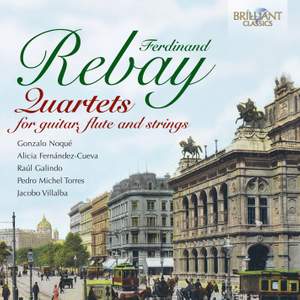 Rebay: Quartet for Guitar, Flute, Viola and Cello in A Minor

A rare and important discovery: 2 quartets (one for guitar and strings, the other featuring the flute) by Ferdinand Rebay, a Viennese composer of the first half of the 20th century.

Rebay’s music (unlike his contemporaries of the Second Viennese School) remained in the Late Romantic idiom.The fact that he composed for guitar doesn’t mean his music is light- weight, on the contrary, these are serious and complex masterworks, in which the guitar is explored as an equal and independent instrument.

Excellent performances by a group of Iberian soloists.