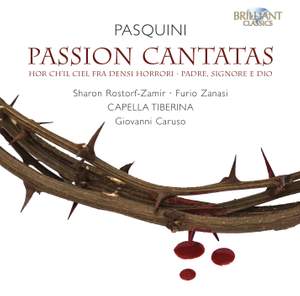 Bernardo Pasquini (1637–1710) was born in the province of Pistoia, Italy. Drawn to Rome like many promising young musicians, his first of many posts was as organist at the Chiesa Nouva church, and in 1667 he obtained a good position in the service of Prince Giovanni Battista Borghese, where he composed ceremonial music at the Borghese Palace and spent the rest of his days.

Along with Corelli and Scarlatti, Pasquini played a major part in the musical life of Rome, and was famous for his skill as both a harpsichordist and organist. The two Passion cantatas featured on this new CD, Hor ch’il Ciel fra densi horrori and Padre, Signore e Dio, were composed for Holy Week at the Borghese Chapel, and comprise miniature oratorios.

Although the chapel was relatively small, the instrumental forces used at the time for large-scale oratorios could reach 150 players. Here, the forces are much more modest, but the richness of Pasquini’s scoring and the textures he created make for a lush and sumptuous sound. The music is sensual, dramatic and extremely beautiful: Pasquini was a composer of great skill, and his depictions of thunder and lightening as well as stormy seas are truly impressive.