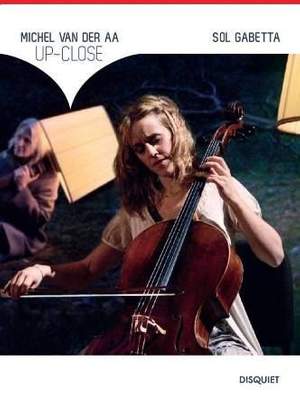 Michel van der Aa's enterprising synthesis of sound and vision continues with a work which transcends its hybrid nature in audacious fashion...Sol Gabetta has the crucial role - moving as she... — Gramophone Magazine, April 2012 More…

Part cello concerto, part film opera, Dutch composer Michel van der Aa’s Upclose explores the human condition through reflected and overlapping sounds, images and plotlines. On this DVD, recorded during a European tour in March 2011, it is performed by its dedicatees, the much admired young cellist Sol Gabetta and the Amsterdam Sinfonietta, while Vakil Eelman plays the solitary elderly lady in the filmed segments.

A solo cellist begins with a melancholy, yet insistent soliloquy. As the string orchestra behind her joins in, an image suddenly appears on screen. In the middle of a deserted concert stage, laid out exactly as for the concerto, an old woman is seen scribbling coded messages on sheets of paper. Her actions and those of the cellist come closer and closer until at the end they mimic one another, without ever completely connecting. Images and music leak from screen to stage and back again in a poetic exploration of the rituals of communication.

Themes of virtual reality and plural identities have been present in Van der Aa’s music for ten years, but in the riveting Up-close he goes even further, folding sound and screen over and over on themselves until certainty slips completely from the audience’s grasp.

Gramophone’s Young Artist of the Year in 2010, the Argentine-French cellist Sol Gabetta impresses wherever she plays with her captivating interpretations, her passionate, fullbodied playing and her charismatic personality. A Sony recording artist, since 2006 she has directed the Solsberg Festival in Switzerland, her chosen home, and recently founded the Baroque orchestra, ‘Capella Gabetta’.

Michel van der Aa's enterprising synthesis of sound and vision continues with a work which transcends its hybrid nature in audacious fashion...Sol Gabetta has the crucial role - moving as she does with enviable dexterity between platform and film-screen, though without any impairing of either her commitment or musicianship in what is a fluent and dynamic account of an imaginative score.