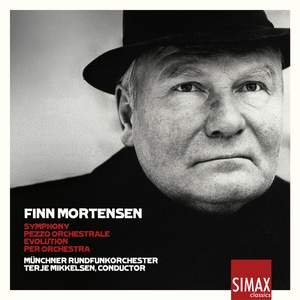 As his second recording with the Munich Radio Orchestra, the conductor Teje Mikkelsen is releasing an album featuring the highly rewarding and rich orchestral works of the 20th century Norwegian composer Finn Mortensen. The disc includes his Symphony, Pezzo Orchestrale, Evolution, and Per Orchestra.

Finn Mortensen (1922-83) was first Professor of composition at the Norwegian Academy of Music, and became the inspiration for a generation of composers, bringing ideas first hand from Darmstadt as well as Stockhausen's masterclasses at Studio für Elektronische Musik.

Very much inspired by the music of Anton Bruckner, Mortensen's early Symphony is a structural masterpiece in a late romantic style, loaded in emotional content. His later compositions became much freer, but in these "neo-serial" works, as represented in the rest of the programme on this disc, melodic and tonal elements play an important part.

The conductor Terje Mikkelsen studied with Mariss Jansons during his many years in Oslo, as well as with Jorma Panula at the Sibelius Academy. He was the first to record Edvard Grieg's Symphony, and has recently released premiere recordings by other Norwegian composers including Svendsen, Halvorsen, Alnæs and Tellefsen. In September 2011, Mikkelsen led the Munich Radio Orchestra in a spectacular recording of Keith Emerson’s "Tarkus", "The Endless Enigma", Piano Concerto and a world premiere of his newly written work, "After all of This" with the composer on keyboards.

The Munich Radio Orchestra give a splendid account of [the Symphony] under Terje Mikkelsen's firm direction, allowing the symphony's expansive nature full rein while underlining the holistic nature of its thematic relationships...These Munich performances are compelling despite the unfamiliarity of the style.