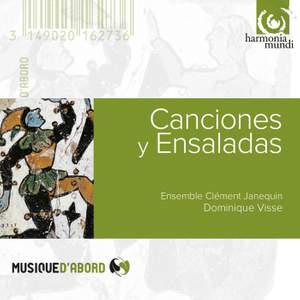 Songs and instrumental pieces of the Spanish Golden Age

This recording presents us with the finest chansons and instrumental pieces of the Spanish Renaissance - the Golden Age which, between the accession of Charles V (1516) to the end of the reign of Philip II (1598), saw the blossoming of an incredibly rich polyphonic output. Of the 'Ensalada' Cervantes tells us that it was 'a kind of song in different metres': it was thus called because it was like a culinary mixture: these 'salads' are an Iberian form of the quodlibet and the Parisian fricassées.