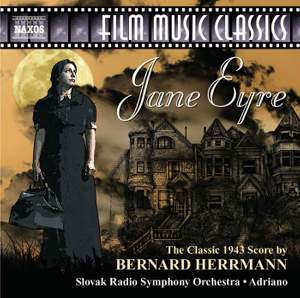 Rochester's Past - The Fire

The Room - The Rattle

The Wedding - The Wife

Bernard Herrmann’s score for Jane Eyre was completed in 1943. It was his fourth film score and, like The Magnificent Ambersons before it, saw collaboration with Orson Welles. Not only is Jane Eyre Hermann’s longest film score, it is one of his most sumptuous, romantic and eerily evocative. He features a marvellous array of sonic effects – high winds, celesta, and muted brass – all designed to deepen and colour the characterisation, and orchestrated with his customary brilliance. This recording of the score restores, for the first time, cuts made during the recording or editing of the original film.