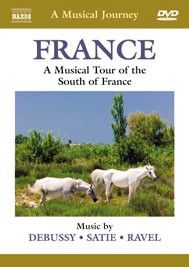 Offer, France: A Musical Tour of the South of France

The Places • The tour opens with views of the Camargue, the marshy region near Arles with its wild life. Views of the Côte d’Azur are intercut with glimpses of the Munich Glyptothek with its collections of Roman and Greek statuary. Near Arles is the ancient Abbey of Montmajour and the fortified monastery and Abbey on Saint-Honorat, one of the Iles de Lérins. In Arles we see the Roman theatre and necropolis and, at Saint-Rémy-de-Provence, the remains of the ancient Gallo-Greek town of Glanum.