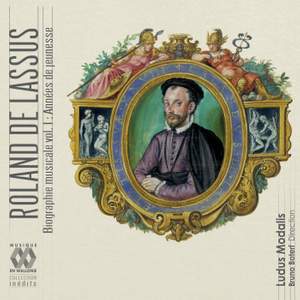 Using sopranos on the top lines and a countertenor for the altus gives a fresh, immediately appealing sound — Gramophone Magazine, June 2012 More…

The greatest name of the fifth generation of Franco-Flemish composers is Roland de Lassus. He translated his name into Italian as Orlando di Lasso as soon as he achieved international fame, which came very early. This is the first in a set of five recordings, celebrating the most illustrious composer of the second half of the sixteenth century.

Using sopranos on the top lines and a countertenor for the altus gives a fresh, immediately appealing sound

all the members of Ludus Modalis...seem well equipped to sing Renaissance polyphony...Their sound palette seems exactly right for these marvellous works of the young Lassus; and their singing is expressive and nuanced without ever sounding forced or exaggerated...Few composers have rivalled Lassus for the psychological depth with which he set his texts...In Ludus Modalis he has found his ideal interpreters