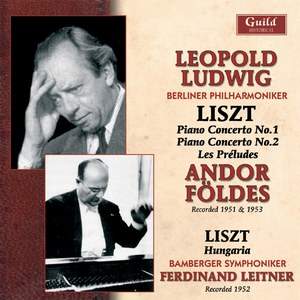 In the year of the Liszt bicentenary we offer these recordings of three of the composer's most popular works, performed by two of the most prolific of post-war European artists. Leopold Ludwig conducts throughout, and is heard with the Berliner Philharmoniker in Liszt's most famous Symphonic Poem, 'Les Préludes' and also with this great orchestra and the Bamberg Symphony in Liszt's Piano Concertos Nos 1 & 2 in which the soloist is the admired Hungarian pianist Andor Foldes. These early Deutsche Grammophon recordings were originally recorded with state of the art fidelity in the early 1950s and have been remastered to the highest modern standard, to make a true collector's item.