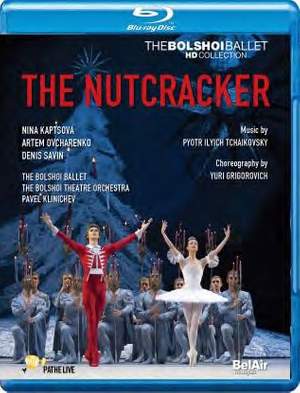 A masterpiece of classical dance, and a Christmas favourite with audiences everywhere, this Nutcracker is a magical version of the score by Tchaikovsky filmed at the Bolshoi Theatre. Since its première in Saint-Petersburg in 1892, The Nutcracker has been one of the most successful classical ballets and Tchaikovsky's score has become one of his most famous compositions. Yuri Grigorovich deals with Hoffmann’s fantastic imagery and takes ideas from Marius Petipa’s scenario: battle of the mice, snowflakes flurry, character dances executed by the dolls that came to life…

The most talented soloists of the Bolshoi Ballet appear in this production including Nina Kaptsova (Marie) and Artem Ovcharenko (the Nutcracker Prince) and Denis Savin (Drosselmeyer).