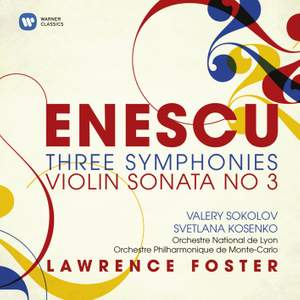 George Enescu (1881-1955) was known primarily as one of the great virtuoso violinists of his day, although he was also a celebrated conductor and influential teacher of his instrument – Yehudi Menuhin, Arthur Grumiaux, Ivri Gitlis, and Christian Ferras were just a few of the great violin soloists of the latter half of the 20th century who passed through his classes in Paris. Apart from the First Romanian Rhapsody, it is only recently that Enescu, the composer of a small but substantial catalogue of works, has come to the fore and this set, comprising his three completed symphonies and his best-known Violin Sonata, should further enhance his reputation.