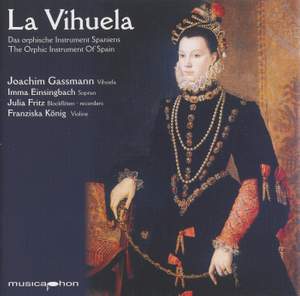 The Orphic Instruments of Spain

The Spanish vihuela has taken a special place in the music of the 16th century. It is a cosmos of its very own, or rather a comet which blazed across the sky at about 1500 and soon after 1560/70 ceased to glow, not finding a real successor. It is courtly art – as such intended to please and delight to the listener – and by all means on a par with Spanish organ music in its compositional quality and earnestness.

If it admits influences from abroad then only from the pinnacles of European music, works from Josquin, Richafort and other internally renowned composer of that time. The composers of the villancicos, fantasias, recercadas, canciones and, above all, the diferencias (formerly a novelty in Europe: the variation) were typical expressions of the Renaissance. They were educated, often engaged in various areas of artwork, for example, the poet Juan de Encina, or Luis de Milán who emulating the Italian role model of Castiglione wrote a book about the courtier, which dealt with the virtues distinguishing the nobleman at court. They were poetical composers of wonderful songs and, at the same time, austere counterpointers who elaborated congenially simple polyphonies which, however, particular for this reason touch us so strongly.

To them, vocals and the vihuela belonged together. This is obvious in their efforts to merge with the succession of mythological vocalists. For example, the frontispiece of “El Maestro” (Valencia 1535) by Luis de Milán displays a representation of Orpheus as a singer who naturally plays the vihuela. Or Luis de Narváez has the image of the singer Arion precede his work “Los seys libros de Delfin” (Valladolid 1538), showinghow Arion is rescued from distress at sea by the dolphins he had summoned with his chant (which, of course, is accompanied by the vihuela). Hence the canciones and vilancicos accompanied by the vihuela certainly are the vihuela’s most significant contribution to the history of Spanish music.