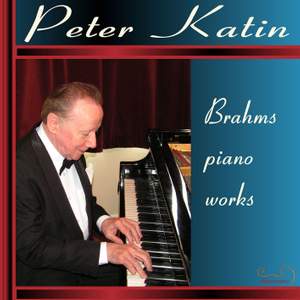 Katin was once one of British pianism's big beasts, and this CD, though short on the requisite soulful beauty, reflects his swashbuckling style. The Variations have compelling force. — BBC Music Magazine, February 2012, 3 out of 5 stars

No. 1. Capriccio in D minor

No. 2. Intermezzo in A minor

No. 3. Capriccio in G minor

No. 4. Intermezzo in E major

No. 5. Intermezzo in E minor

No. 6. Intermezzo in E major

No. 7. Capriccio in D minor

Some lesser-known but majestic masterpieces here, in a disc originally issued in 1991 on the Olympia imprint and now available again at mid-price. The original review in Gramophone stated “This is an attractive performance, with mostly unhurried tempos……. and beautifully recorded”

Born in London, Peter Katin’s musical talent was evident at the age of four, and he was admitted to the senior department of the Royal Academy of Music when he was twelve, four years before the official age of entry. The success of his Wigmore Hall début in 1948 started him on a career that has taken him throughout the world (he was the first British artist to give a post-war solo tour of the then USSR).

He has now almost forty recordings, more than at any other time in his career, which have been received with critical superlatives. These include the complete Chopin Nocturnes and Impromptus, Grieg Lyric Pieces, Chopin Waltzes and Polonaises and the Rachmaninov Preludes. A live performance of a recital including the Liszt Sonata was released by Athene to a rave review in Classic CD. His interest in period pianos has resulted in three such recordings, as well as an all-Chopin programme on his own Collard & Collard 1836 instrument, and another on a Broadwood grand that was personally used by Chopin on the occasion of his last visit to London.

Katin was once one of British pianism's big beasts, and this CD, though short on the requisite soulful beauty, reflects his swashbuckling style. The Variations have compelling force.