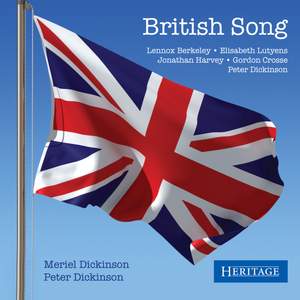 This brother-sister partnership of some 30 years offers British song with many an unpredictable difference — BBC Music Magazine, September 2013, 4 out of 5 stars More…

Dreaming of a dead lady

It is not long

When the star was on her brow

A star stands on her forehead

I said goodbye to the earth

The street was empty

Where did we go?

Last night I drove a car

The repentance of Lady T

The brother and sister team of Meriel and Peter Dickinson was widely known from the late 1960s to the early 1990s. They made a strong impact with programmes of American music in all parts of the British Isles and in several European countries, including broadcasts [American Song was reissued on Heritage HTGCD 231 in 2011]. They appeared together in the BBC TV programme for the centenary of Charles Ives (1974); Meriel Dickinson was accompanied by Copland in another BBC TV programme made for the composer’s 75th birthday; and in 1986 they both performed on the South Bank Show documentary about Peter Dickinson produced by Melvyn Bragg on ITV.

In addition to their popular and entertaining programmes they also worked closely with a number of living British composers who were particularly attracted by the special qualities of their performances. Three works written specially for the Dickinsons form the basis of this collection of reissued first recordings. None of the music falls into the category of the conventional English song cycle and all of it demonstrates the vitality of the voice and piano medium enriched by a variety of texts and dramatic situations

consistently fine, in good sound, and the repertoire is enormously interesting.