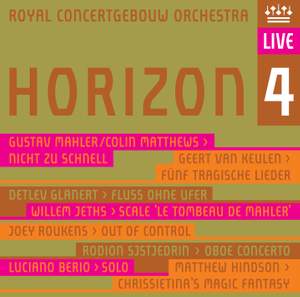 This fourth release in the Royal Concertgebouw Orchestra’s ‘Horizon’ Series brings together two forms of homage. CD 1 represents a tribute to Gustav Mahler, the orchestra having devoted itself to a large-scale project commemorating the composer’s 150th birthday and the 100th anniversary of his death during its 2009- 2011 seasons. In addition to a chronological series of performances of all the great symphonies – effectively constituting the third Mahler Festival held in Amsterdam following those of 1925 and 1995, the orchestra programmed a series of concerts featuring works exhibiting a strong connection to Mahler’s compositions. Four world premieres of works composed for this series have been brought together on CD 1, the fifth being the opening title on CD 2.

The three other recordings on CD 2 feature members of the orchestra playing high-profile roles as solo or ensemble players, thereby symbolising a hommage to the virtuosity and the musical intelligence and flexibility of the 120 individual musicians making up the Royal Concertgebouw Orchestra. Oboist Alexei Ogrintchouk and trombonist Jörgen van Rijen are heard here in the world premieres of two works written for their instruments by Rodion Shchedrin and Luciano Berio respectively. Assistant principal violinist Marijn Mijnders and Monica Naselow, a member of the second violin section, team up in an explosive performance of Hindson’s 'Chrissietina’s Magic Fantasy' for two violins, the discovery of the chamber music marathon with which the Society of Friends of the Concertgebouw and the Royal Concertgebouw Orchestra celebrated its 75th anniversary in 2009.

The Horizon series is an audacious project presenting top-class live performances in consistently fine if soft-grained sonics...The second disc veers off into pieces old and new, randomly showcasing the attributes of distinguished orchestra members....A curate's egg then but one with plenty to titillate the open-minded consumer.