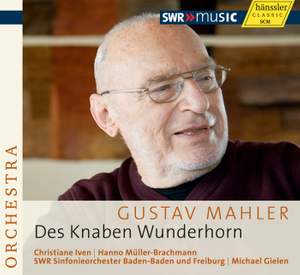 As so often, the veteran 'modernist' proves himself a highly perceptive Mahlerian...[Muller-Brachmann's] penetrating, never heavy bass-baritone is pleasing and he is blessed with fine diction... — Gramophone Magazine, April 2012 More…

No. 9. Wo die schonen Trompeten blasen

This is a special release commemorating the 100th anniversary of Mahler’s death and Michael Gielen has returned to make his first ever recording of the complete Des Knaben Wunderhorn. These vital new performances show that Gielen, despite now being in his eighties, is not slowing down. He is one of our generation’s greatest Mahlerians.

As so often, the veteran 'modernist' proves himself a highly perceptive Mahlerian...[Muller-Brachmann's] penetrating, never heavy bass-baritone is pleasing and he is blessed with fine diction too, projecting the humour of 'Lob des hohen Verstandes' to excellent effect...admirers of Gielen's Mahler should not hesitate to acquire what is his belated first recording of these songs.