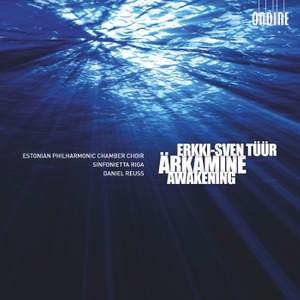 Tüür's ability to transmute if not base metal into gold then at least the familiar into the magical is immediately evident...Tüür's shimmering, twinkling, yet at the same time edgy textures may... — Gramophone Magazine, February 2012 More…

This new release showcases a cross section of choral and orchestral works by Erkki-Sven Tüür (b. 1959), who with Arvo Pärt counts among the most popular Estonian composers internationally.

The central piece on this disc is the world première recording of Awakening (Ärkamine), written in 2011. It features the acclaimed Estonian Philharmonic Chamber Choir and Sinfonietta Riga under the direction of Daniel Reuss.

According to Tüür, Awakening contemplates the springtime mystery of nature’s rebirth, embracing both the Christian conception of the world and the rather more pantheistic comprehension of creation peculiar to ancient Estonians.

Also included is The Wanderer’s Evening Song, a choral setting of poems by Ernst Enno and written for the EPCC’s 20th anniversary in 2001.

Insula deserta, for string orchestra, became Tüür’s first great success outside of Estonia, when first performed in Finland in 1989.

Tüür's ability to transmute if not base metal into gold then at least the familiar into the magical is immediately evident...Tüür's shimmering, twinkling, yet at the same time edgy textures may be an acquired taste. I can only say that I feel greatly enriched for having acquired it.

the performances seem idiomatic and assured...It's good, too, to see the Helsinki-based Ondine continuing its policy of presenting composers from other Baltic countries. This thoughtful music is evidence of the rich harvests to be reaped.

Beautifully delivered by the Estonian Philharmonic Chamber Choir under Daniel Reuss, it's a poised, rather austerely beautiful piece, in which Tüür's characteristically dense proliferations emerge only in the instrumental writing. The a cappella settings of Ernst Enno in 2000's The Wanderer's Evening Song inhabit an equally delicate soundworld to evoke a similar sense of wonder at the natural world's beauties