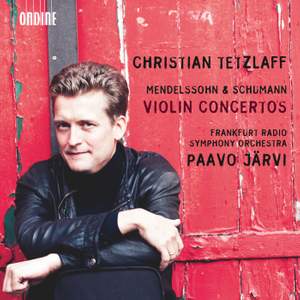 Tetzlaff uses quite a bit of rubato in the opening [of the Mendelssohn], giving a few moments of doubtful ensemble...But he shapes dynamics and phrases sensitively, and the slow movement is less... — BBC Music Magazine, February 2012, 3 out of 5 stars More…

The Mendelssohn Concerto is one of the most frequently performed violin concertos of all time, with an unfailing popularity among audiences.

Also included is Schumann’s more seldom recorded Fantasy for Violin and orchestra, which he completed shortly before writing the Concerto.

One of Schumann’s last significant compositions, the long-lost Violin Concerto saw its première performance only in 1937, and was hailed by Yehudi Menuhin as the “historically missing link of the violin literature.”

Christian Tetzlaff is accompanied on this recording by the Frankfurt Radio Symphony Orchestra – whose Artist-in-Residence he became in 2008/09 – and their acclaimed music director Paavo Järvi.

This is the first CD in a series of releases featuring Christian Tetzlaff on the Ondine label.

Tetzlaff uses quite a bit of rubato in the opening [of the Mendelssohn], giving a few moments of doubtful ensemble...But he shapes dynamics and phrases sensitively, and the slow movement is less febrile and more poised...Tetzlaff treats [the Fantasy] with affection and virtuosity in turn. In the [Schumann] concerto, Jarvi's powerful delivery of the dramatic introduction grabs the attention, as does Tetzlaff's first entry.

If I describe the Mendelssohn performance as meticulous, this is not to suggest a lack of spontaneity or awareness of the broader picture but rather a situation in which a determination to follow the composer's instructions has led to an account of unusual depth and subtlety...Tetzlaff takes us right to the intimate heart of the [Schumann] slow movement.

Tetzlaff and Jarvi are as one, the 'give and take' being almost as chamber music, writ large. It is also a wholly Romantic performance [of the Mendelssohn], a yielding choice of tempos that permit flexibility without losing sight of the underlying forward momentum...This uncommonly interesting CD is well worth the attention of the genuine lover of echt-Romantic repertoire

[Tetzlaff] brings both urgency and a compelling sense of purpose to the violin writing, so that its weaknesses, its sometimes blunt phrasing and routine figuration, are entirely transcended. It's a remarkable piece of musical alchemy, but then his way of presenting the Mendelssohn concerto as if it were a new discovery is exceptional, too.