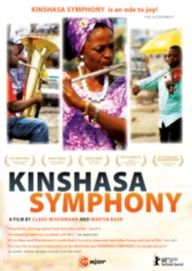 The awarded film about a symphony orchestra in the Congo

it's the 'Ode to Joy' that drives the film forward as singers and musicians sweat to master Beethoven's great clamour. Beyond that, we see the people's lives, their city and their country - a... — BBC Music Magazine, March 2012, 4 out of 5 stars More…

The film: Two hundred orchestral musicians are playing Beethoven’s Ninth – “Freude schoener Goetterfunken”. A power cut strikes just a few bars before the last movement. Problems like this are the least of the worries facing the only symphony orchestra in the Congo. In the 15 years of its existence, the musicians have survived two putsches, various crises and a war. But concentration on the music and hopes for a better future keeps them going. Kinshasa Symphony is a study of people in one of the world’s most chaotic cities doing their best to maintain one of the most complex systems of joint human endeavour: a symphony orchestra. The film is about the Congo, the people in Kinshasa and the power of music.

it's the 'Ode to Joy' that drives the film forward as singers and musicians sweat to master Beethoven's great clamour. Beyond that, we see the people's lives, their city and their country - a complex social tapestry of poverty, crime, portable TVs, hair extensions, and hope for better times. It's impossible not to be moved...As for the level of music-making, it's the uplifting spirit not the fine detail that matters.

Claus Wischmann's leisurely documentary follows the progress of the choir and orchestra as they prepare for a huge open air concert...But the film is also about the inhabitants of Kinshasa. Martin Baer's photography, Peter Klum's skilful editing and Pascal Capitolin's soundscape capture the chaos, overcrowding, mud roads, ancient vehicles and pitiful living condictions all too vividly. Required viewing for all in the affluent West