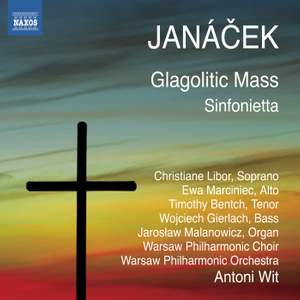 There are many attractive aspects to this performance, not least the heroic tenor of Timothy Bench and the full-throated singing of the sopranos and altos. Too often, however, the delivery of... — BBC Music Magazine, February 2012, 3 out of 5 stars More…

Leoš Janáček’s dramatic Glagolitic Mass is set to a ninth century Old Church Slavonic text. With its highly individual synthesis of thunderous brass outbursts, rhythmic energy, radiant melodies and interludes of rapt contemplation, the work has established itself as a unique contribution to the choral repertoire. An avowed statement of his belief and patriotic pride in Czechoslovakian national independence, Janáček’s Sinfonietta uses spectacular large-scale orchestral forces. Both of these works belong to the composer’s last and most inspired decade, and represent his mature musical language at its most communicative.

There are many attractive aspects to this performance, not least the heroic tenor of Timothy Bench and the full-throated singing of the sopranos and altos. Too often, however, the delivery of Janacek's motor rhythms seems mechanical...[In the Sinfonietta] Wit and the Warsaw Philharmonic are more consistently convincing.

Wit's Warsaw Philharmonic forces plug directly into the emotional power of Janacek's music, reacting like demons to the distinct undulations of its speech-inspired melodic lines and spanning a rich tonal spectrum all too often missing in performances of the Glagolitic Mass. The rhythmic crispness and sheer intensity of the conductor's interpretation return massive dividends in 'Veruju' ('Credo').

The polished choral singing is a joy, with excellent pitching throughout, especially in the cruelly exposed unaccompanied entries. The orchestra's contribution is equally distinguished. How refreshing it is to hear such 'unhomogenised' clarinet- and trumpet-playing. The solo quartet also acquits itself favourably, in particular Christiane Libor, who is on spectacular form.

Overall, Wit and his Warsaw forces have the measure of this extraordinary mass...What makes this new disc indispensable is the Sinfonietta. For both performance and sound it belongs in the top echelon of recordings of this dazzling work...In my opinion, then, Wit’s is the best option now for this particular combination of works on one disc. The Sinfonietta alone makes it indispensable.