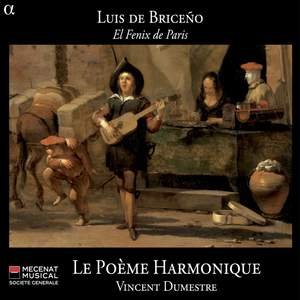 part of the delight of Spanish baroque music is hearing familiar song melodies and dance rhythms in fresh and inventive settings. The realizations and performances by La Poeme Harmonique are... — International Record Review, March 2012 More…

anon.: Villancico: No soy yo

Don Luis: a Spaniard at the court of Louis XIII… Luis de Briceño’s arrival in France was marked by a wave of enthusiasm. The Spaniard was at the heart of a polemic that questioned the supremacy of the lute, an instrument cherished by French music lovers of the beginning of the 17th century. Our rekindled interest lies not in this controversy but in the beauty of Briceño’s compositions and the freedom they offer the musicians who play them. This man of incisive wit and character, nicknamed « El Fenix de Paris », once said about the polemic he caused: « Todos se burlan de mi y yo me burlo de todos, porque si me llaman asno ellos son neçios y tontos… » « Everyone makes fun of me and I make fun of everyone, because they call me a donkey they are crazy and foolish idiots… » On this album discover le Poème Harmonique in a repertoire bearing the marked touch of popular Spanish music, accompanied by the delightful song of Isabelle Druet and Claire Lefilliâtre.

part of the delight of Spanish baroque music is hearing familiar song melodies and dance rhythms in fresh and inventive settings. The realizations and performances by La Poeme Harmonique are endlessly delightful...As one one would from this exceptional ensemble, both singing and playing are of the highest order.