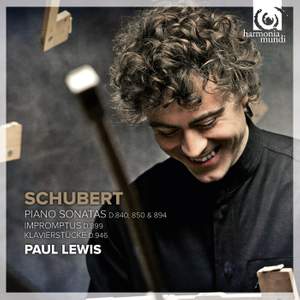 I enjoyed every moment of these two superbly recorded discs...These are model accounts, in which Lewis, clearly a modest man, is intent on keeping himself out of the picture...I would like to... — BBC Music Magazine, January 2012, 4 out of 5 stars More…

Recording of the Week,  Sublime Schubert from Paul Lewis

Following his ten-year immersion in Beethoven and critically-acclaimed recordings of Schubert’s three great song-cycles with tenor Mark Padmore, the British pianist brings unrivalled poise and intimacy to the Piano Sonatas D840, 850 and 894 and the Impromptus D899.

Paul Lewis has just emerged from a vast Beethoven project: the complete sonatas and piano concertos, greeted all over the world as a landmark and completed in 2011 by the 'Diabelli Variations' – and now he returns to Franz Schubert, the other key focus of his concert career, the other pillar of his discography.

In this double album, three late sonatas are accompanied by two sets of short pieces brimming with inventiveness, the ' Impromptus' and 'Klavierstücke'.

“there were magical moments too, when Lewis's playing touched the sublime. His own Schubert odyssey is not to be missed by anybody who appreciates pianism of the highest caliber.” Barry Millington, London Evening Standard, concert review

I enjoyed every moment of these two superbly recorded discs...These are model accounts, in which Lewis, clearly a modest man, is intent on keeping himself out of the picture...I would like to hear more of him, and I'm sure Schubert would feel the same...When Schubert is being mysterious yet somehow simple, as in the unfinished so-called 'Reliquie' Sonata, Lewis's reticence is ideal. If he is open to criticism at all, it is only at the most exalted level.

every now and again a recording comes along that makes you want to dance in the street, handing out copies to complete strangers. This is one of those instances...Time and again, you marvel at the confidence and sureness of Lewis's playing, combined with the finesse and musicality that he has always displayed. It's the kind of playing, in fact, where comparisons cease to matter....An undoubted contender for the 2012 Awards.

Particularly admirable is Lewis's differentiation between Schubert's idiosyncratic indications...[in D850] his playing seems to exude a quiet jauntiness, an unencumbered masculinity, observant, appreciative and filled with pleasure that, in its guileless utterance, is heart-stoppingly beautiful...I don't know of a more convincing or enjoyable performance [of D946]

Lewis’s playing is characterised by a wonderful range of tonal colours and subtle control of moods. There is a real poise and intimacy about his playing and while he allows the energetic and unruly passages to threaten the status quo, they never succeed...I have heard more dramatic performances, and also more ‘classical’ ones, but never anything so moving.

Lewis’s Beethoven sonatas placed him firmly in the company of great contemporary pianists. In Schubert, too, his graceful phrasing and command of dynamic contrasts are equally impressive. His magisterial account of the C major Sonata (D840) challenges all other recorded interpretations with its combination of head and heart.

As Lewis's legions of admirers would expect, they are all superbly well played, with the same clarity and careful attention to every detail that is also lavished on the Four Impromptus of D899 and the three very late piano pieces D946. Unlike some of Lewis's more recent Beethoven performances, there's nothing over emphatic here... It's a fine, thoughtful set.

Lewis’s mature insight into the workings and emotional characteristics of these works lends his interpretations particular power and depth, not just in the sonatas but also in the impromptus and the late Klavierstücke as well. Considered thought always seems to support and nourish Lewis’s performances, and here his instincts animate the music absorbingly.