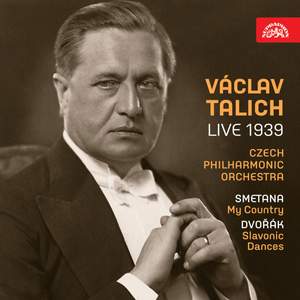 It is not hard to imagine what music portraying such a story meant to the oppressed people at that concert in 1939 and after having already burst into wild applause at the end of each poem the... — Chris O'Reilly, Presto Music, 19th December 2011 More…

SMETANA - My Country - I Vysehrad

SMETANA - My Country - IV From Bohemian Fields and Groves

Rostropovich’s legendary account of the Dvorak Cello Concerto from the 1968 Proms, and Václav Talich’s emotionally-charged 1939 performance of Smetana’s Má Vlast, given at the National Theatre in Prague shortly after the Nazis entered the city.

The sound, the name, the first international successes, as well as the first recordings made by the Czech Philharmonic Orchestra, are inseparably linked with the name of Václav Talich. The recordings contained on this CD originated under truly exceptional circumstances and document unrepeatable moments.

The performance of Smetana’s My Country on 5 June 1939 in Nazi-occupied Protectorate Prague – and what’s more, at the National Theatre, perceived as a symbol of national cohesion – was an expressive manifestation of Talich’s patriotism. The moment’s sheer emotional charge gave rise to what may justly be considered the conductor’s finest recording of My Country and, following a long-lasting ovation, the enthusiastic audience spontaneously rounded off the concert by singing the Czech national anthem.

The presented recording of this concert and that of Dvořák’s Slavonic Dances, which was performed at the National Theatre four days later, have been preserved owing to their direct transmission to several European cities. The recording was made by Radio Norway, which possessed the most advanced audiorecording technology of the time. Talich’s My Country, exuding defiance and a resolve to protect freedom, stands in stark contrast to Rafael Kubelík’s legendary 1990 My Country, which reflects the euphoria at the regaining of freedom. This recording, first released by the Czech Philharmonic, was hailed by the distinguished critic Rob Cowan in Gramophone magazine as perhaps the most powerful My Country to have ever been recorded.

It is not hard to imagine what music portraying such a story meant to the oppressed people at that concert in 1939 and after having already burst into wild applause at the end of each poem the triumphant conclusion of Blaník is greeted with massed shouts of approval before the audience spontaneously launches into the national anthem. It is incredibly moving and all captured on a newly issued Supraphon recording.