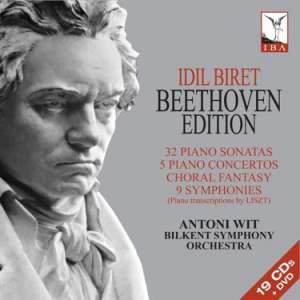 The Idil Biret Beethoven Edition began in 1985 with a universally acclaimed box set of the Liszt transcriptions of Beethoven’s nine symphonies, recorded for EMI in St. Bavon Church at Chamont Gistoux, Belgium. Another session took place in 1994 to record three sonatas in the same location to test how these would sound. Several years later, the decision was made to record the remaining 29 sonatas and to release them together with the nine symphonies on Idil Biret’s own label Idil Biret Archive (IBA). The project grew to cover all the works of Beethoven for piano and orchestra, adding the five piano concertos and Choral Fantasy with the Bilkent Symphony Orchestra conducted by Antoni Wit, which concluded this epic Beethoven Edition spanning a period of over 23 years.