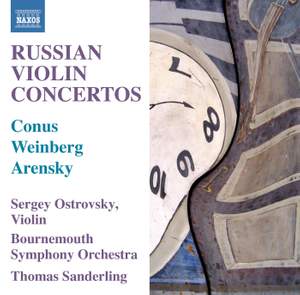 Guided by Tchaikovsky’s influence, Anton Arensky’s neglected Violin Concerto is notable for its rich vein of melody and delicacy of orchestration. Julius Conus was a notable student of Arensky, and his virtuoso Violin Concerto, romantic in its variety of moods and expression, was once equal in popularity with that of Tchaikovsky. Mieczysław Weinberg, whose powerful Violin Concerto is available on Naxos 8557194, was highly regarded by Shostakovich. The recently revived Violin Concertino, which predates the Violin Concerto by over a decade, is an arrestingly scored and often bittersweet work which here receives its world première recording. Multi-award-winning violinist Sergey Ostrovsky has been praised for his ‘marvellous tone’. (The Strad)