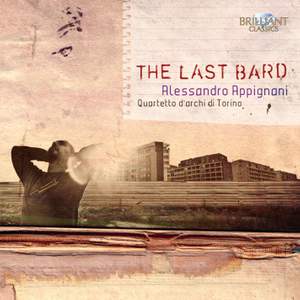 Not difficult music yet with sufficient substance to engage and reward the listener prepared to try something modern and out of the way. — MusicWeb International, March 2012

I. The Angel Fall

Appignani: Window in the Wood

Alessandro Appignani, an Italian contemporary musician and composer, identifies as “The Last Bard”, the person giving voice to the deepest human emotions, from the ancient times of the Gilgamesh Saga to the present world, man’s journey on an epic scale.

Appignani’s music cannot be put into a style, it presents life in all its expressions and feelings, from simple folksong to frantic complexity and energy.

Performed by top class musicians, in chamber music setting. Appignani tours around the world with this programme.

Italian composer Alessandro Appignani began to play piano and cello as a small child, and was later drawn to composition, with a keen interest in the avant-garde of the 20th century.

Alfred Schnittke is cited by Appignani as a composer who both inspired and influenced him. He studied piano with Marco Fumo, Hans Graf and Lazar Berman. His music is personal and as poetical as the titles might suggest.

First recordings of music by this young Italian composer.

Not difficult music yet with sufficient substance to engage and reward the listener prepared to try something modern and out of the way.