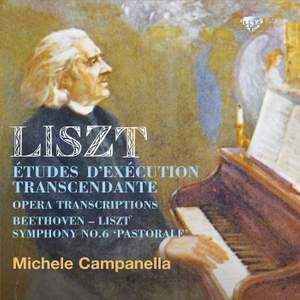 i Nibelungen: No. 1. Hagen und Krimhild

I. Awakening of Cheerful Feelings Upon Arrival in the Country: Allegro ma non troppo

“Campanella has much virtuosity and there is plenty of entrancing pianism: but he is also deeply thoughtful” Gramophone

Michele Campanella is internationally known as one of major interpreters and virtuoso of the Liszt repertoire, and has been awarded the Grand Prix du Disque three years (1976, 1977 and 1998, the latter for “Franz Liszt - The Great Transcriptions, I-II” with Philips) by the prestigious “Franz Liszt” Academy in Budapest.

Campanella has faced in over 40 years of career most of the principal pages of the piano literature In addition to his activity as a musician, Campanella adds the role of writer. On March 10th in the Spazio Risonanze del Parco della Musica of Rome, he will present his book Il Mio Liszt, that the pianist dedicates to his author of reference This box of hitherto unissued recordings will be a must for any pianophile. Michele Campanella is already known to such connoisseurs as a Liszt player of the highest distinction, who has played the composer’s music for many decades now.

These recordings were made in Italy in the last 10 years, and reveal him as an ever more acute interpreter of this often elusive music.

Most obviously demanding, of course, are the 12 Transcendental Studies, that ultimate synthesis of literary-inspired creative fire and technical wizardry. Two discs of Wagner transcriptions venture from the familiar and relatively straightforward (Isoldes Liebestod) to the transformative recreations, entirely worthy of the originals, wrought by Liszt on themes from Lohengrin and Parsifal.Then on a disc of Liszt is the well-known Rigoletto paraphrase but also transcriptions of music from Gerusalem and Simon Boccanegra. Altogether we encounter the protean genius of Liszt at his most flexible, responding to the appetite of his day for both operatic pot-pourris and for clouds of piano dreams.