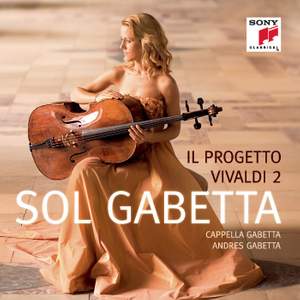 Gabetta has a ravishing tone, especially in Vivaldi's soulful slow movements. The vigorous cello pyrotechnics of the finale of the G minor, RV 416 are negotiated with bravado to spare, and the... — BBC Music Magazine, February 2012, 4 out of 5 stars More…

Leo: Concerto for Violoncello and Orchestra in D major

Platti: Concerto for Violoncello and Orchestra in D minor, Op. 657

Sol Gabetta is the young female superstar of the cello. The Argentine-French cellist, who speaks six languages fluently, has captured the hearts of audiences in many countries with her playing and her charisma. Sol has received prestigious awards: she won three Echo Klassik prizes in Germany, received Argentina’s Gardel Prize as “artist of the year“ in three consecutive years and in 2010 won the prestigious Gramophone Award as “young artist of the year”.

For her fifth recording for Sony Music and the first on the Sony Classical label, Sol Gabetta has teamed up with her own ensemble, the Cappella Gabetta, a small ensemble that plays baroque music on period instruments, which was founded by Sol Gabetta and her brother Andres Gabetta (lead violin). Sol and Andres have chosen this group of musicians so that they can make music among friends and explore works of the Baroque and Early Classical genres.

On the new album, entitled Il Progetto Vivaldi 2, Sol Gabetta and Cappella Gabetta perform beautiful Italian cello concertos. Three deservedly popular concertos composed by Antonio Vivaldi are coupled with a rarely recorded sonata by Vivaldi and a charming cello concerto by Leonardo Leo, a Neapolitan composer. The CD also includes a world premiere recording, a cello concerto by Giovanni Benedetto Platti, an Italian composer who worked in Germany between 1730 and 1763. The cello concerto by Platti was recently discovered near Würzburg in the archive of a castle of Duke of Schönborn. The Vivaldi concertos which Sol Gabetta has chosen for this recording were also discovered in this archive.

“Argentinian Sol Gabetta brings tremendous verve to five of Vivaldi’s effervescent concertos for cello in this scintillating ‘Progetto Vivaldi’ partnership…she digs into each phrase with infectious enthusiasm…” The Guardian.

Gabetta has a ravishing tone, especially in Vivaldi's soulful slow movements. The vigorous cello pyrotechnics of the finale of the G minor, RV 416 are negotiated with bravado to spare, and the febrile edginess of the A minor's end encourages sly banter.

The cello-playing Count von Schonborn provides the connecting theme for Sol Gabetta's disc; his library contains some significant Vivaldi manuscripts, including the sole source of the sonata recorded here...With its finely worked contrapuntal tuttis and picturesque, melancholy Adagio, [Platti's] Concerto, in this vigorous, poised performance, proves to be a real find.

Gabetta again plays with unerring precision, but also with a sure-footed interpretative authority...As before, it is the fertility of imagination undergirding every one of Gabetta's performances which marks this colelction out as being something exceptional...Highly recommended.