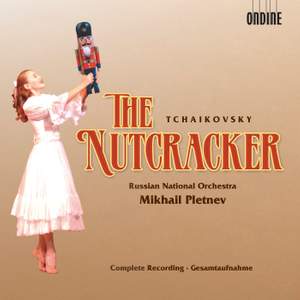 I love the slow burn of Pletnev's Christmas-tree transformation, the nimbleness of the battle between the Nutcracker's forces and the mice, and the strangeness of his Snowflake Waltz...the RNO... — BBC Music Magazine, March 2012, 3 out of 5 stars More…

Act I Tableau 1: Decoration of the Christmas tree

Act I Tableau 1: Children's galop and entry of the parents

Act I Tableau 1: Departure of the guests - Night

Act I Tableau 1: The battle and transformation scene

Act I Tableau 2: The forest of fir trees in winter

Act I Tableau 2: Waltz of the Snowflakes

Act II Tableau 3: The enchanted palace of the kingdom of sweets

Act II Tableau 3: Arrival of Clara and the Nutcracker

Building on the great success of their previous Swan Lake recording, This CD features star conductor Mikhail Pletnev and the Russian National Orchestra with the complete ballet music from The Nutcracker by Peter Tchaikovsky.

The Nutcracker is an absolute masterpiece of Russian orchestral music, and perhaps the crowning achievement of Tchaikovsky’s artistic output. It benefits from enormous popularity worldwide and among a wide range of audiences.

Mikhail Pletnev is recognized as a reference performer of Tchaikovsky’s music, and in particular of The Nutcracker; his unrivalled piano transcriptions of Nutcracker Suite were selected for the 1998 Anthology “Great Pianists of the 20th Century” (Philips Classics).

Since founded by Pletnev in 1990, the RNO has quickly reached a position at the top of Russian orchestras, as well as among the top ten of international orchestras (as listed by Gramophone). The orchestra’s very first CD release in 1991 featured Tchaikovsky’s Pathétique Symphony, hailed by Gramophone as this symphony’s best recording in history; further great recordings on Deutsche Grammophon and PentaTone have garnered a Grammy Award and numerous other accolades.

I love the slow burn of Pletnev's Christmas-tree transformation, the nimbleness of the battle between the Nutcracker's forces and the mice, and the strangeness of his Snowflake Waltz...the RNO woodwind have plenty of character throughout, and are brightly lit by Ondine's vivid recording; prepare for an earthquake in the big, symphonic Act 1 climaxes, the sphere in which Pletnev truly excels.

There's no hint of serving up old or reheated fare from the Russian National Orchestra under founder and artistic director Pletnev, despite the fact that this must be grindingly familiar ground. Together they more than meet the challenge of lifting the entire score into a coherent whole...The delightfully detailed playing from the orchestra brings these enchanting characters to life, in a well paced, elegant narrative.

On this evidence, Mikhail Pletnev remains one of the most intelligent and stylish Tchaikovsky conductors around...The Nutcracker enshrines another formidably assured display that repeatedly has one grasping at the wondrous skill with which Tchaikovsky handles his forces. Once again, the playing of the RNO is past praise in its unruffled, articulate composure.

The Russian National Orchestra under Mikhail Pletnev highlights the delicacy of Tchaikovsky’s orchestration. Even the more solemn moments have a wit and irreverence about them, as if the players are smiling to themselves as they play.