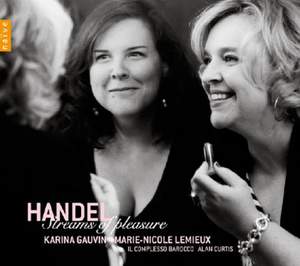 Bright, edgy woodwind; neat violins; an ever-purposeful bass line; two healthful, smiling voices and some lovely music. There is much to admire...but there is little sense of dramatic context...If... — BBC Music Magazine, December 2011, 4 out of 5 stars More…

Theodora, HWV 68, Act II: To thee, thou glorious son of worth

Judas Maccabaeus, HWV 63, Act I: Duet: From this dread scene

Act I: Recitative: Ah! whither should we fly? - Aria: As with rosy steps the morn

Handel: Joseph and his Brethren

Joshua, HWV 64, Act I: Our limpid streams with freedom flow

Solomon, HWV 67, Act I: Recitative: Thou fair inhabitant - Welcome as the dawn of day

Hercules, HWV 60, Act I: Recitative: Forgive me - Aria: My father

Theodora, HWV 68, Act II: Recitative: But why art thour disquieted - Aria: Oh! that I on wings could rise

The oratorios from which Karina Gauvin and Marie-Nicole Lemieux perform excerpts on Streams of Pleasure were premiered between 1744 and 1750 and are among Handel’s last compositions. Soprano and contralto are joined for this pleasurable collection by internationally acclaimed early music ensemble Il Complesso Barocco under its musical director Alan Curtis.

Founded by Alan Curtis in Amsterdam in 1979, Il Complesso Barocco has become a renowned Baroque orchestra with a focus on Italian opera and oratorio of the period. Its rich discography was for a time devoted to the late madrigal repertory, but it has also released an award-winning recording of Rossi’s Primo Libro di Madrigali, as well as a disc of Handel’s arias and duets, Amore e Gelosia with Patrizia Ciofi and Joyce DiDonato. Il Complesso Barocco’s releases of Handel operas include Dmeto, Rodrigo, Arminio, Deidamia, Radamisto, Berenice, Alcina, and Ariodante, several of which have won the ‘International Handel Recording Prize’.

Highly regarded contralto Marie-Nicole Lemieux has recorded for numerous labels, and now enjoys an exclusive contract with Naïve, for which she has recorded the title roles in Vivaldi’s operas Griselda and Orlando furioso, and La Fida Ninfa. In recent times she has released a critically acclaimed programme of Vivaldi arias with the Ensemble Matheus under Jean-Christophe Spinosi.

Fellow Canadian soprano Karina Gauvin’s has recorded for labels including ATMA, Astrée, and Dorian, and has appeared on Naïve’s recording of Vivaldi’s Tito Manlio as well Handel’s Ezio, Alcina, and Tolomeo with I’l Complesso Barocco for DG and DG Archiv.

Bright, edgy woodwind; neat violins; an ever-purposeful bass line; two healthful, smiling voices and some lovely music. There is much to admire...but there is little sense of dramatic context...If you can put that aside, you can relish the pizazz with which Lemieux and Gauvin attack each oratorio character's emotional state...It's a handsome, stylish, polished performance.

Gauvin's soprano has a warm timbre that blends beautifully with Lemieux's deep, dusky contralto. Individually, too, they are fabulous - Lemieux's opening 'Destructive war' is a dramatic tour de force. The heart of the disc is the profound, moving duet 'Streams of pleasure'...these polished, beautifully balanced performances are a pleasure to listen to

We prize Handel’s stage works for their tragic depth, but there is a gentler, nobler strain that explains the title given to this CD. Uniting two stylish Canadians, one a soprano and the other a contralto, it comprises 15 numbers from the English oratorios Handel wrote late in his career.

There is indeed plenty to enjoy, especially where soprano Karina Gauvin is involved...[Lemieux] is a singer with temperament to burn...But in less overwrought music...I wanted less gusty phrasing, more care from true legato...If this is not quite the Handel recital I was hoping for, it's still worth investigating for Lemieux's viscerally exciting singing and, above all, Gauvin's ideal Handelian mix of grace and profound emotional truth.

Part of the attraction of [the] blending of voices is that Gauvin's middle tones have a warmth, almost mezzo-ish, which accords well with Lemieux's rich bloom...I am not one who throws accolades around like confetti, but the enjoyment that this CD has provided brings from me an IRR Outstanding recommendation. The disc is entitled 'Streams of Pleasure' but for me it is a full, flowing river.