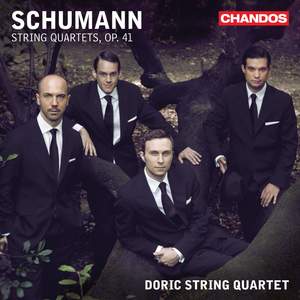 Here's a disc that merits an especially big welcome...At last comes a strong challenger which brings together all three of these wonderful but so often misunderstood quartets. The play has all... — BBC Music Magazine, December 2011, 5 out of 5 stars More…

On this disc we present three masterpieces of the nineteenth-century chamber music repertoire: Schumann’s set of string quartets, Op. 41. The works are performed by the Doric String Quartet, exclusive Chandos artists and among the most impressive young quartets on the classical music scene today. They regularly perform at major festivals and venues throughout the UK as well as across continental Europe, Asia, and the US.

The three string quartets, Op. 41 make up Schumann’s only published contribution to the genre. They were completed during a period of intense creative activity in 1842. In February, Schumann noted in his diary that he was having ‘continual quartet thoughts’. In April and May, he devoted himself to studying the quartets by Beethoven, Haydn, and Mozart; in early June, the first two quartets were completed, and the third followed soon after in July that same year.

Brimming with the canons with which Schumann was so taken, as well as his characteristic turn of melody, these works all display in full the spirit that one would expect from this most romantic of romantic composers.

Schumann arranged for the first, private, performance of the quartets to take place on 13 September 1842, as a present for his wife, Clara, on her twenty-third birthday. Clara, always supportive of her husband’s efforts, praised them as ‘lucid, finely worked, and always in quartet idiom’. The esteemed theorist and composer Moritz Hauptmann said: ‘His [Schumann’s] first, which delighted me immensely, made me marvel at his talent… it is cleverly conceived and held together, and a great deal of it is very beautiful.’

Here's a disc that merits an especially big welcome...At last comes a strong challenger which brings together all three of these wonderful but so often misunderstood quartets. The play has all the fragile pathos, volatility, exuberance, and quirky humour one hopes to find in this music...The Doric Quartet also have a compelling sense of how Schumann's moods can turn on a musical sixpence...What more can one say?

The starry young Doric Quartet delves into Schumann's fantastical worlds in a performance rich in both imagination and care. Applying a generally delicate approach, with thin vibrato expressively aided by the use of well-judged portamentaos, they draw out a wealth of nuances. The mood of intimacy, half-lights and many-shaded moods is enhanced by their efforts to find a 'period' style appropriate to Schumann and his whirlwind imagination.

Among numerous affecting details: the sinuous allegro opening of No 2; the driven upsurge of its scherzo; and the plangent sigh that is No 3’s andante espressivo introduction, rarely more espressivo than here.

The Dorics play with warmth, finesse and exciting attack.