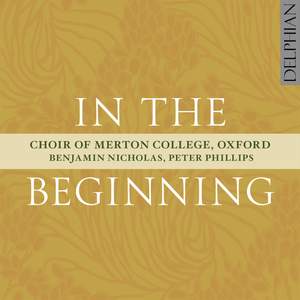 The 18 uninterrupted minutes of Copland's a cappella In the Beginning are a major test of any choir's stamina and concentration, and it's one the Mertonians pass with confidence...[Beth Mackay]... — BBC Music Magazine, December 2011, 4 out of 5 stars More…

Jackson, Gabriel: In the Beginning was the Word

Copland: In the Beginning

Founded as recently as 2008, the new Choir of Merton College, Oxford is rapidly emerging as a major force in collegiate choral music. On this, their debut recording, the choir’s two directors helm a diverse programme that reflects the range and reach of the choir’s daily repertoire. Bookended by two pieces titled In the Beginning Gabriel Jackson’s ravishing version of the rarely-set Johannine Prologue, Copland’s glowing account of the first seven days of creation – this disc offers a themed sequence of Renaissance and modern classics, all captured in sumptuous sound in the radiant acoustics of Merton’s famous chapel.

The 18 uninterrupted minutes of Copland's a cappella In the Beginning are a major test of any choir's stamina and concentration, and it's one the Mertonians pass with confidence...[Beth Mackay] presents the creation narrative with vivid buoyancy, and she is responded to keenly by the body choral, whose brightness of tone and attack enliven what can easily become a dry and turgid piece of storytelling.

if a handbook were to be written on How to Instantly Form a Crack Professional Choir, then they should be asked to write it...the new Merton College Choir has leap-frogged its way almost to the top of the collegiate choral pile...their mellow timbre is beautifully flecked with upper-register light. Highly versatile, they're well capable of taking on a silvery-sharp edge when called for by the music...A stunning recording debut

Listening to their superb performances and seamless blending of voices, it's hard to believe that the choir is only four years old.They have a vast range of dynamics and vocal colouring, and they're fully responsive to the different styles...An intensely moving recording, strongly recommended.

The choir is astonishingly accomplished for such a new starter and the standard has been set high, not that there is any surprise in that...[the Copland is] a superlative summation of the new Merton College Choir's achievement that in its own right is sufficient to recommend the entire disc.

Plainly, this is a fine choir, and a worthy rival to the other mixed-voice Oxbridge ensembles that have flourished in recent times.

In a generously imaginative gesture that can only benefit the future of British choral music, the college recently set up a new foundation, training 18 scholars. The results are already outstanding; Nicholas and Phillips draw a wonderfully fresh, vibrato-free sound from their young singers, who seem particularly at home in new repertoire

This fine disc showcases the standards already achieved across a wide repertoire...The choir sounds secure; just a little stridency from the sopranos needs attention. And the young singers revel in the luscious clusters of Whitacre and Jackson.

The Choir of Merton College was formed in 2008. It makes a typically English sound – it’s all to do with the clarity of diction and the flawless intonation. The basses are nicely present but never overwhelm what’s above them, and the Merton College Chapel acoustic gives the choral sound a glow which is never too resonant...It’s hard not to love this disc for its sheer chutzpah – tackling music from five centuries and never putting a foot wrong.