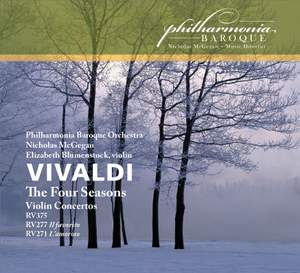 [the B flat Violin Concerto's] slow movement finds Elizabeth Blumenstock at her most eloquent....McGegan is rhythmically incisive [in the Seasons], but strong beats are often leant on unsubtly — BBC Music Magazine, February 2012, 3 out of 5 stars More…

Our familiarity with Vivaldi’s music makes it a particular challenge to any soloist not only to measure up to the virtuosity of past performers, but also to bring to the performance something new. In the case of Elizabeth Blumenstock and the Philharmonia Baroque Orchestra, that “something new” is actually something very old and precious in its authenticity and faithfulness—a performance that would, without doubt, have pleased the Red Priest mightily.

RV271, L’amoroso and RV277, Il favorito were part of a set of six concertos Vivaldi gave to Emperor Charles VI, who rewarded him with lots of money, a knighthood, a gold medal and an invitation to come visit him in Vienna. And yet one cannot help feeling that these pieces weren’t actually written for the ruler of the Holy Roman Empire. The innocent tenderness and joy of L’amoroso and Il favorito, their distinctly feminine lyric sadness and longing, would point to the pieces first having been written for the girls and women of the Pietà.

The rarely recorded concerto in B-flat major (RV375) is from Vivaldi’s late period. Complex and nuanced, the piece is filled with emotions that seem to belong more exclusively to the composer. While RV375 is recognisably the work of the same exuberant man who composed “The Four Seasons,” there is a morbid sense of foreboding in the music, especially in the first movement, and a tone of defiance throughout.

Baroque violinist Elizabeth Blumenstock is widely admired as a performer of compelling verve and eloquence. She has played with Philharmonia Baroque Orchestra since 1981 as a regular soloist, concertmaster, and leader. She is also a regular concertmaster with American Bach Soloists, the Göttingen Händelfestspiel Orchestra and the Italian ensemble Il Complesso Barocco. She plays a 1660 Andrea Guarneri violin on loan from the Philharmonia Baroque Orchestra Period Instrument Trust.

[the B flat Violin Concerto's] slow movement finds Elizabeth Blumenstock at her most eloquent....McGegan is rhythmically incisive [in the Seasons], but strong beats are often leant on unsubtly

[Blumenstock] combines impeccable taste with a strong technique to bring something fresh to Vivaldi's music...she colours Vivaldi's pastoral world delicately and within the restrained vocabulary of his time...The Philharmonia Baroque Orchestra, under Nicholas McGegan, provides strong and colourful support for which Blumenstock, too, must claim responsibility.