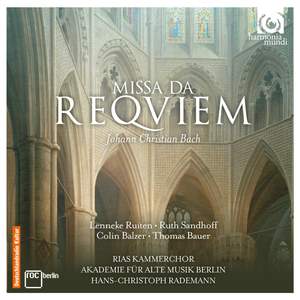 The performances under Hans-Christoph Rademann's direction are excellent, with notably strong contributions from the RIAS Kammerchor and the Berlin Akademie fur Alte Musik. Colin Balzer and Thomas... — BBC Music Magazine, January 2012, 4 out of 5 stars More…

After an acclaimed disc of Johann Ludwig Bach, Hans-Christoph Rademann continues his fascinating exploration of the most famous musical dynasty. Born in 1735, the ‘London Bach’ was the youngest of Johann Sebastian’s sons. He seems to have remained in his father’s shadow until the age of 19, when he had the chance to travel to Italy, very likely to receive guidance from the celebrated Padre Martini, as his (future) friend Mozart was to do some years later. It was in Milan that he wrote the two works recorded here, including an incredible Requiem with a completely unexpected formal design; in matters of style, however, the 22-year-old composer had already laid the foundations of all his later output.

The performances under Hans-Christoph Rademann's direction are excellent, with notably strong contributions from the RIAS Kammerchor and the Berlin Akademie fur Alte Musik. Colin Balzer and Thomas E Bauer are stylish soloists with a feeling for textural imagery...this is overall a fine and interesting release.

Soprano Lenneke Ruiten is (by a whisker) prima inter pares in a first-rate quartet of soloists, and the choir and orchestra are excellent throughout.

tip top performances which show the young Johann Christian Bach in the strongest light at the turning-point of his career. The Requiem is undoubtedly his youthful masterpiece, and this is the finest recording of an of his Italian music I've heard. Thoroughly recommended.

The Requiem is a strange, heterogeneous piece, which sets only three sections of the traditional requiem mass...In many ways, the Miserere is a more convincing work. It's conceived on a grand, imposing scale, with carefully plotted tonal architecture and, as Hans-Christoph Rademann's performance shows, an orchestral accompaniment of great imagination and variety.

Both pieces are clear in their ambitions of grandeur, and both the vocal and choral writing succeed in making a strong impression. The harmonic language does, however, tend towards blandness..With a strong team of soloists (Lenneke Ruiten, Ruth Sandhoff, Colin Balzer, Thomas E Bauer) these new Berlin performances are so strong that you may hardly notice.