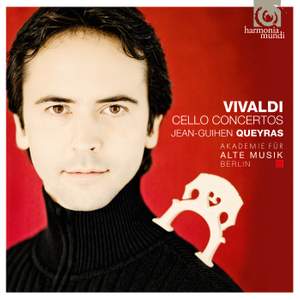 Queyras's Adagio, with the lightest of accompaniments - solo lute - is especially eloquent...Queyras's scheme, alternating the cello with varied sinfonias and concertos for the string band, is... — Gramophone Magazine, December 2011 More…

Vivaldi: Sinfonia in C major from Dorilla in tempe, RV 709

Alongside the famous Quattro Stagioni, La Notte, and so on, Vivaldi wrote no fewer than 27 concertos for the cello – an instrument which at the time was generally limited to playing basso continuo. With the genuine virtuosi he had available to him at the Ospedale della Pietà, the Red Priest played a key role in the emancipation of the cello, which so readily inspired him to invent varied figuration. The musicians of the Akademie für Alte Musik Berlin have chosen to add highly expressive pieces by Caldara to punctuate the sumptuous feast of sound offered by maestro Queyras.

Queyras's Adagio, with the lightest of accompaniments - solo lute - is especially eloquent...Queyras's scheme, alternating the cello with varied sinfonias and concertos for the string band, is particularly successful, with a series of extremely lively (though on occasion excessively fierce) performances by the Akademie fur Alte Musik, Georg Kallweit contributing a beautiful violin solo in the well-known Concerto RV565.

Queyras’s handling of Vivaldi’s dazzling streams in the faster movements is brilliant and precise, despite extreme tempos, and he is eloquently expressive in the beautifully phrased slower music. In two effervescent and sophisticated concertos for two violins and cello (RV 415 and RV 565), his partners, Georg Kallweit and Elfa Run Kristinsdottir, are equally good.

The timbre and sonority of Queyras's instrument imparts a rich, antique flavour, while his deft bowing – as on the finale to the "Concerto in G minor" – perfectly embodies the Vivaldian qualities of delight and vivacity. The album is full of memorable moments

The adage goes that Vivaldi did not so much compose hundreds of concertos as write the same concerto hundreds of times. However, this disc featuring the estimable cellist Jean-Guihen Queyras illustrates the fallacy of that argument. ...Queyras is equal to all Vivaldi’s challenges and intricacies, adopting a buoyant “period” style that is fully matched by the incisive, pungent playing of the Akademie für Alte Musik Berlin.

[in RV409] Queyras’s soft-grained tone is strikingly partnered by the almost bleakly plaintive bassoon playing of Christian Beuse. The players of the Akademie für Alte Musik Berlin delight in the sharp cut and thrust that Vivaldi so often offers in theses works.