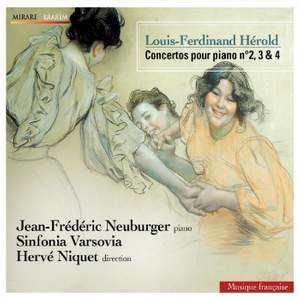 In 1810 he won first prize in a piano competition with one of his own compositions, which had never been done before. One of the judges remarked: “This piece is full of flaws, but I see great things ahead for him.” In 1812 he won the Prix de Rome and whilst in Rome, during the spring of 1813 he composed his first symphony, which all Prix de Rome winners were required to do in order to show their progression in studies. In 1815 he moved from Rome to Naples for health reasons. While there he composed several pieces including his second symphony and three string quartets. Thereafter his output was mainly for the opera or ballet. Here in a disc that complements Glossa’s Prix de Rome series, also with Hervé Niquet, Frédéric Neuburger plays concertos 2, 3 and 4. The Sinfonia Varsovia grew out of an expanded Polish Chamber Orchestra, after concerts with the late Yehudi Menuhin, who became their first guest conductor. It’s musical directors since have included Krysztof Penderecki and Mark Minkowski.