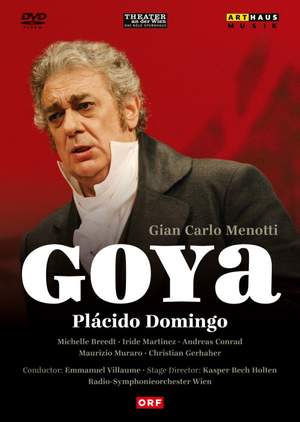 Gian Carlo Menotti, who would have celebrated his hundredth birthday in the summer of 2011, was far from being a musical revolutionary – and yet he had a crucial influence on the history of 20th century opera. He wrote his first opera at the age of eleven and remained committed to this great art form for the rest of his life. His Amelia al Ballo, first performed in 1937, was an early example of the elements that were to bring him fame and lasting popularity: grand melodies, dense orchestration and an unerring sense of the dramatic. “What is important for me is to see living, singing people on the stage,” he once said – and it was with this in mind that he wrote all the libretti for his own works. One can imagine the conversation about music – in particular modern music – that took place when Menotti invited Domingo to dinner in 1977. It wasn’t long before the crucial question was raised: “Gian Carlo, why don’t you write an opera for me?” As they thought about an appropriate topic, Domingo mentioned the life of the great Spanish artist Francisco Goya, whose work he admired above all others. “Domingo suggested Goya and I agreed immediately”, said Menotti later. “I think it was the only time I accepted someone else’s idea.”

“Gian Carlo Menotti, who celebrated his 93rd birthday a few days ago, received thundering applause at [GOYA‘s] Viennese première…Menotti himself once characterised the music as “impertinently melodic”. It is indeed...very effectively written - so effectively that at the première, applause broke out continually during the performance.” Neue Zürcher Zeitung, 2004

“Goya is strong, passionate, quite theatrical and overwhelmingly romantic....This opera is constructed on unabashed passion and most of all excitement…it’s intensive theater – comic, probing, visually spectacular.” Washington Post, 1986