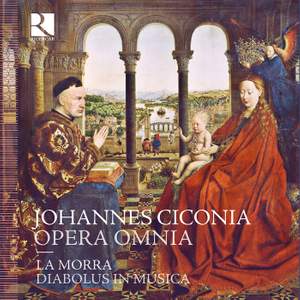 La Morra prefer a more ruminative and thoughtful approach to the songs that is again entirely different from what has been heard before - including what must be the slowest-ever performance of... — Gramophone Magazine, December 2011 More…

Active in Venice and Padua at the beginning of the 15th century, Johannes Ciconia was undoubtedly the most important composer of this transitional period. Born in Liège and trained in the principles of the French and Italian Ars Nova, he played a considerable role in the musical development that led little by little towards the Renaissance.

His works are in all the forms current for the period: French chansons, Italian ballades and madrigals and Latin motets for particular occasions as well as individual movements from the Mass that proclaim the arrival of the form’s golden age in the 15th century. This recording of his complete works has been entrusted to two remarkable ensembles that are no strangers to Outhere’s catalogue: La Morra for the secular music and Diabolus In Musica for the sacred works and the motets for particular occasions.

La Morra prefer a more ruminative and thoughtful approach to the songs that is again entirely different from what has been heard before - including what must be the slowest-ever performance of 'Per quella strada'. As with any complete recording, some tracks are better than others, but we do get a new and clearer picture of who Ciconia was.

the French group's manner translates into transparently clear textual declamation, especially in the single-texted 'Glorias' and 'Credos'...In short, this recording is an impressive document of both a great musical figure and the great progress over the last three decades of performance practice scholarship for late-Medieval music.