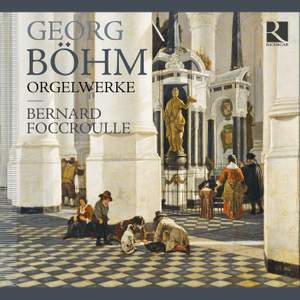 Bernard Foccroulle here continues his exploration of the north German organist composers with a recording of the works of Georg Böhm, a composer with whom J.S. Bach had come into contact at the end of his adolescence. At the foot of a manuscript dated around 1700 in which he had copied out pieces by Buxtehude, Reinken and Pachelbel that served as models for his own compositions, the young Johannes Sebastian Bach wrote that he was a pupil of Georg Böhm in Lüneburg. The organ works of this north German master foreshadow the young J.S. Bach’s first compositions in many respects; it was also clearly thanks to Böhm that Bach came into contact with the various genres of French music of the period. The Schnitger organ of the Grote Kerk in Alkmaar lends itself particularly well to this repertoire thanks to the power and the quality of its solo registers.

Bernard Foccroulle does his very best to put over this sturdy music with plenty of refreshing choices of registration.