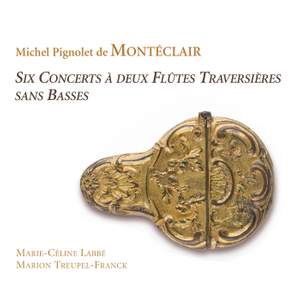 The Concertos for two transverse flutes without bass make up part of a thread begun in 1709 with the Suites de Pièces à deux flûtes traversières (Suites of Pieces for two transverse flutes) by Michel da La Barre, who was both a composer and the first great French flute player. Particularly popular in France during the first half of the 18th century, this genre inspired many composers.

It is only a short step to imagining that the regular practice of duos could even at this early stage have constituted an important pillar of all flute players’ training. I even believe that cloaking the music in such attractive finery has promoted, and still promotes today, a playful, almost sensual transmission of an instrumental know-how from generation to generation, and from teacher to student, explaining the success of three centuries of French flute playing. Montéclair’s masterly interchange of the voices invites the players to demonstrate great complexity in their performance, arousing a desire for osmosis, creating a surge of confidence, and of that very baroque emotion, tenderness.

He invites the performers to go beyond themselves, to lose themselves in joining with the other player, to dissolve into an intangible world, beyond time and space, only to come back to Earth in the next instant through a well-known melody, or a firmly marked bass, immediately evoking a desire to dance. This CD aims to fill an unfortunate void in current recordings of Montéclair’s music, and to encourage further interest in his compositions.