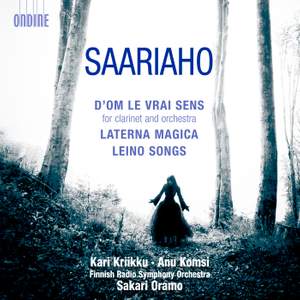 Kaija Saariaho (b. 1952) is one of the internationally leading composers of today, and the 2011–12 Composer-in-Residence at New York’s Carnegie Hall.

In the composer’s words, “the general idea of this piece is based on the famous medieval tapestries called La Dame à la Licorne [displayed at the Musée de Cluny in Paris]. The subject matter is the five senses and the ‘sixth sense.’”

The Finnish Radio Symphony Orchestra partner Kriikku admirably in this enchanting concerto and under Oramo's sensitive direction provide beguiling accompaniments for Anu Komsi in the four Leino Songs...[Laterna magica] is a filigree tone-poem with a soul of steel that showcases the Finnish orchestra splendidly. Ondine's demonstration sound caps a marvellous issue.