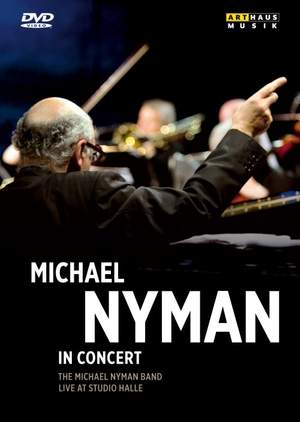 Nyman: An Eye for Optical Theory

Nyman: Come Unto These Yellow Sands

Nyman: In Re Don Giovanni

Many people associate the name Michael Nyman primarily with the soundtrack for Jane Campion’s film “The Piano”, but that fails to do justice to this highly successful British artist.

The extensive oeuvre produced by composer, conductor and pianist Nyman includes not only fi lm music but also opera, songs, ballet music and orchestral works and displays an impressive musical diversity. Anyone wishing to gain an impression of this versatility would have had an opportunity to experience the Michael Nyman Band in top form at this performance. The concert offers an exciting sample of Nyman’s past work and also presents the German premiere of The Musicologist Scores, marking the climax of an engagement with the music of Georg Friedrich Handel that began in the 1960s. Using an unusual combination of saxophone, flute, brass, piano, string quartet and bass guitar, The Michael Nyman Band is the composer’s preferred ensemble for trying out all his new works. All over the world the powerful, energetic playing of the band – developed under his leadership over a period of three decades – brings his works to sparkling life and has long since become a characteristic feature of his music.