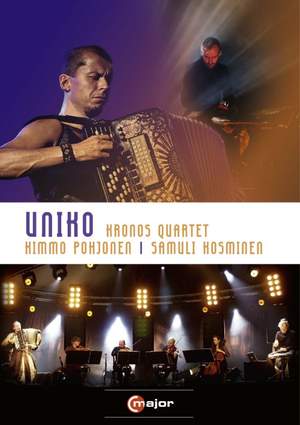 All music written by Kimmo Pohjonen and Samuli Kosminen

UNIKO is the collaboration between the Grammy award winning Kronos Quartet and Finnish duo, accordion adventurer Kimmo Pohjonen and sampling guru Samuli Kosminen. It was commissioned by the Kronos Quartet in 2004 and the present DVD documents the first performance of the suite which was heard for the first time in Helsinki in September 2004. Together with live strings and electric accordion plus effects and manipulations they create a new, multi-dimensional sound world.

Accordionist Kimmo Pohjonen is one of Finland’s most active and important musicians and was nominated for BBC Radio 3 World Music Awards and for the BBC Radio 3 Planet Award. UNIKO’s CD release entered the World Music Charts at No. 6

Samuli Kosminen is one of Finland’s top percussionists and sampling masters, working with Jónsi from Sigur Rós, Emiliana Torrini and many more.

UNIKO has been performed at New York´s Carnegie Hall and Brooklyn Academy of Music, at Royal Albert Hall London for the BBC proms, David Bowie’s Meltdown Festival, Patti Smith’s Meltdown at Royal Festival Hall and in various other countries.

“The music is sheer physicality … Uniko is like an ocean tide coming in.” New York Times

“Kimmo Pohjonen is a performer whose blend of virtuosity and resolute experimentation is routinely likened to that of Jimi Hendrix and Laurie Anderson.” Wire

“Kimmo Pohjonen extends the range of the accordion beyond anything I've previously heard” “We’ve known all this for a long time but with UNIKO his importance in the contemporary music world is now unquestionable.” Songlines

“Kimmo Pohjonen [is] a boundlessly ambitious improviser.” The Guardian