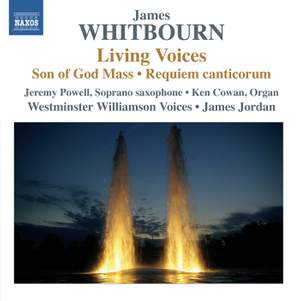 Whitbourn: Give us the wings of faith

Whitbourn: A brief story of Peter Abelard (verson for soprano saxophone and organ)

Whitbourn: A Prayer from South Africa

Whitbourn: All shall be Amen and Alleluia

James Whitbourn is known for his ‘boundless breadth of choral imagination’ (The Observer) resulting in compositions of brilliance and power. His extraordinary work for choir, saxophone and organ, Son of God Mass, receives a new recording from the young voices of one of Westminster Choir College of Rider University’s fi nest chamber choirs under the leading American choral conductor James Jordan. It is heard alongside a collection of première recordings of other works associated with life and death, including the Requiem canticorum and Living Voices, a work to commemorate the dead of 9/11 with a poem by Andrew Motion.

Tonal, tuneful, technically accessible, harmonically palliative: James Whitbourn's music ticks many of the boxes beloved by choral societies...James Jordan directs the Princeton-based choir with grip and sensitivity; he's notably successful in keeping the singers firmly focused throughout all the quiet, restrained music, where concentration and vocal support can so easily weaken.

Whitbourn [b1963] clearly knows how to write effectively for voices, mostly in a chordal texture, always resolutely diatonic and with a heavy slant towards the 'atmospheric'...The choral highlight is undoubtedly the strikingly beautiful Winter's Wait which sets a text by the late Robert Tear. The tone of Westminster Williamson Voices is well honed, muscular and rich, with only occasional lapses in intonation.

If the opening saxophone solo of Son of God Mass reminds one irresistably of Jan Garbarek and Officium, elsewhere James Whitbourn's music is a mixture of a more directly English transcendental cast that one might associate with Howells, say...performances under the assured direction of James Jordan are outstanding; and saxophonist Jeremy Powell has nothing at all to fear from Garbarek.

Here's another welcome collection from a truly original communicator in modern British choral music. Whitbourn's interest in the compelling combination of voices and the soprano saxophone dominates here...The Princeton choir is directed by James Jordan with precision and poise

Those enchanted by the mystic minimalism of John Tavener or Henryk Górecki will rejoice to discover a younger exponent of this soporific style. James Whitbourn is a 46-year-old Brit, who writes choral music so sweet and slow that my brain has only just regained consciousness. Yet it’s cleverly crafted and beautifully performed by the Westminster Williamson Voices, with lots of vaguely Arabic saxophone melismas by Jeremy Powell.