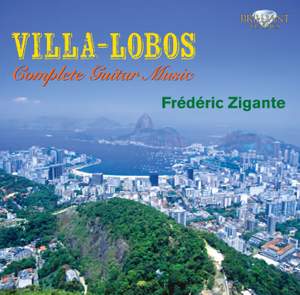 Heitor Villa-Lobos is widely recognised as Brazil’s most important composer, whose style reflects his country and his era: rooted in 20-th century European modernism, he developed his own unique style, blending all colours, smells and sounds of his homeland into his rich, exuberant and vibrant music. Villa-Lobos wrote an immense oeuvre. An important place hold his guitar works, the perfect instrument to present his own style, fusing Latin-American folk-inspired elements with more “learned” European forms, like Etudes and Preludes. The complete guitar works of Villa Lobos, played by one of the best classical guitarists of today, Frédéric Zigante.

Villa-Lobos is perhaps best known for his large scale and exotic orchestral works, but he had a passion for the guitar that went back to his youth, and on which he was a masterful performer. Listeners who know the large orchestral works such as Choros Nos.9 and 12 will be surprised that this group of works – Choros, (which numbered 14 in all, and are all based on Brazilian folk music) started with a work for solo guitar – no.1 is included on CD2 of this set. His output for guitar is slim, but of good quality, and it suffers little from the weaknesses that are apparent in his 12 symphonies, or the 5 piano concertos. When he is at his most improvisatory, and free from formal structures and ‘classical’ restraints he is at his best, and the music has a fresh and spontaneous feel. Villa-Lobos saw a connection between the music of Bach and the music of his native country, and he explored this in his series of works ‘Bachianas brasileiras’.