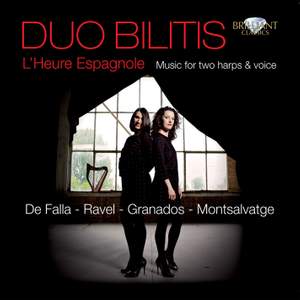 This release contains an adventurous programme of Spanish or Spain-inspired works, arranged for the enchanting combination of two harps, and (in some works) voice. The combination of 2 harps works particularly well in this mainly impressionistic music, providing a fascinating colour palette and deep sonority. One of the harpists, Ekatarina Leventhal, possesses an exceptionally beautiful mezzo soprano voice, and sings the solos in De Falla with zest and passion. (Brilliant Classics 8895). Duo Bilitis won the International Chamber Music Competition in Almere, Holland (2008), the fifth edition of the UITMARKT chamber music competition in Amsterdam (2008) and is finalist of the International Jewish Music Competition 2010.

“Ekaterina and Eva are gifted with extraordinary musicality, professionalism and dedication. Because of the interesting combination of their ensemble and their stunning performance capacities, they manage to captive any audience. Not only should I describe a concert of the Duo as moving, but they bring a sense of humor to their performances as well" Emmy Verhey, concert violinist