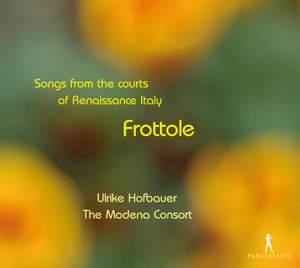 Songs from the courts of Renaissance Italy

they have skill, precision and a delicious warmth of colour: this is controlled and professional playing...Still, for me the real importance of the disc is in the unimaginably gentle way Ulrike... — Gramophone Magazine, November 2011 More…

The frottola was the predominant Italian secular song of the late 15th and early 16th-centuries and the most important and widespread predecessor of the madrigal. The simplicity of the melodic line, usually entrusted to a soprano part and the relatively few contrapuntal lines of the other parts made this repertory for solo voices and lute a popular pastime. Due to improvements in the printing process, more than two dozen books of frottole appeared in print between 1504 and 1531, courtesy of Petrucci and his contemporaries, which contributed to this diffusion and influence. This recording showcases a variety of composers and poets, moods and instrumental combinations. In addition to frottole, we hear instrumental music and dances interspersed. The Modena Consort is one of the few ensembles to perform Renaissance polyphony on contemporary transverse flutes. The group was founded in 1998 in The Hague, and consists of soprano Ulrike Hofbauer, a four-part flute consort and a lute player. The consort has performed in various venues and festivals in Holland, Belgium, France and Switzerland. Hofbauer has been a frequent collaborator with L’arpeggiata & Cristina Pluhar.

they have skill, precision and a delicious warmth of colour: this is controlled and professional playing...Still, for me the real importance of the disc is in the unimaginably gentle way Ulrike Hofbauer approaches the lovely and underrated repertory of the Italian frottola: with generally slow tempi, she brings out more of the pathos and intimacy of the music than is often heard.

A superlatively fine disc...beautifully recorded and the Modena Consort's collaborators...are perfectly chosen. Even in tracks without Santos' subtle percussion, the rhythmic impetus is never lost in the flautists' enjoyment of their delicious sound...Intonation is impeccable throughout.